Our present time is marked by an increased sensitivity and, as a result, an often heightened vulnerability. Nevertheless, yoga practice should not make us more vulnerable and abnormally open. Rather it should make us more stable in our central inner strengths, and open us in a healthy way to the outside world. Calmness and openness, centring and expansiveness, or sensitive involvement in the outside world with simultaneous independent steadfastness are general, initial aims of practice.

So that this stability with concurrent openness can be encouraged, it seems necessary, when practising an exercise for example, that aspirants distinguish between consciously entering into relationship with an object of the outside world and merely remaining in their own subjectivity. Adopting an ordered relationship to the surroundings, to other people or to a theme requires one’s creative forces, the thinking, feeling and willing, to become independently active, and this ultimately results in a natural connection with the outside world. The danger which exists when working with the body or with the breath is always that aspirants immerse themselves far too much in their own subjective emotional state and in this way shield themselves in an unfavourable way. Yet vulnerability increases when practitioners spend too much time with themselves and their corporeality.

This exercise demonstrates prototypically and simply the difference between a natural openness with freedom in breathing, and in contrast a very subjective and deliberate manner of breathing fixed to the body. In order to specifically train this discernment the exercise can be practised in two ways: Through a wide extension of the arms it is possible to take in the breath in a great fullness. Practitioners have the option of sucking the stream of air deliberately into themselves, almost squeezing it in, or else, as is recommended here as a more advanced form, they can accept this breath lightly and freely. To form the exercise in a positive way, the awareness is directed out to the space around. The arms are opened in a wide gesture, and in consequence the sides too, and in the light rising of the arms, the spacial sphere with its air is taken into oneself. The chest area expands and the breath flows silently, lightly, entirely without gravity into the whole lung space. The neck and shoulders remain completely relaxed. 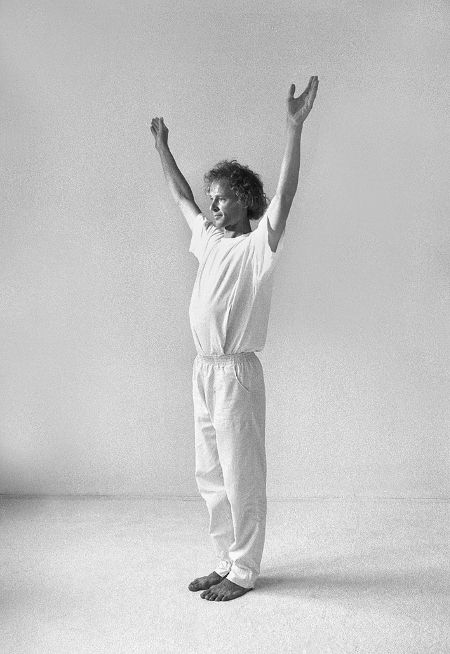 The movement of the wide outwardly directed, opening arms expresses a specific attitude of being-in-relationship. One’s own body and its senses are related to the space outside, and the space outside is experienced as a counterpart to the sense of sight that receives it. By means of this receptive sense-sphere, the I is experienced in its guidance of the awareness, that experiences the space in its secure depth, freedom and expansiveness.

By experiencing themselves in this way in the spacial element and in the receptive breath, practitioners acquire an awareness of a natural order. The air-space surrounds the physical body and clothes it in a kind of gentle coating. In contrast to this, the same exercise can be be done by consciously sucking the air inside and deliberately fixating on the body. Practitioners then no longer experience the space around them, but seem to become stiff, forced and only feel their own subjectivity in the body. With the help of the arms they try to squeeze as much air into themselves as possible. Eventually however the respiratory muscles tense up and the whole breath movement seems difficult, loaded with weight, and strenuous as in physical training.

Breathe in a few times, lightly and into your sides, with the arms gliding up and wide apart and breathe out again lightly and freely with the returning gesture. Do practise the negative form of the exercise as a contrast, in order to get to know the differences both for the body and also for the experience of the spacial element.

With this simple elementary or basic exercise, a very beneficial movement of the sides takes place along with a pleasant aeration of the lungs resulting from lightness.1) With this breath exercise the third cakra, the so-called manipura-cakra, level with the kidney region, is generally addressed. It gives a sense of lightness, expansiveness and leads the awareness into a first interaction with the cosmos. At the same time practitioners experience that breathing does not necessarily constitute deliberate, forced work, but sooner signals an involvement of the awareness with the outside world. Openness, involvement with joyful awareness, and at the same time a wisely co-ordinated calmness, are results, which enrich the state of mind.

This simple, basic exercise can be varied in several ways: 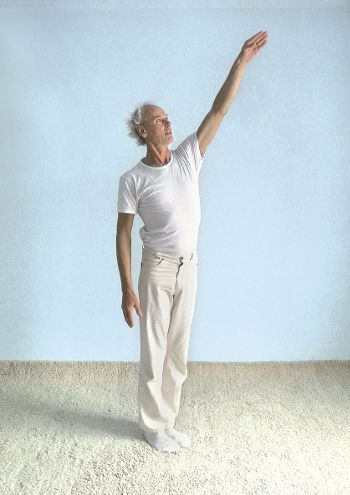 For example, just one arm can be lifted up. 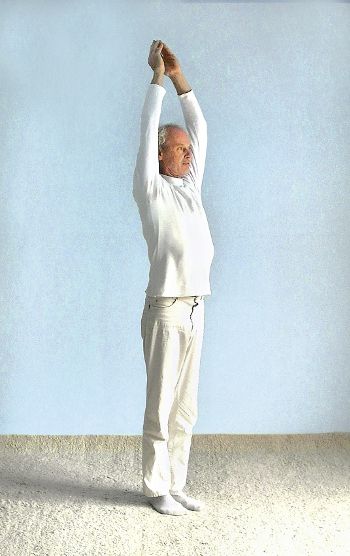 Or it is possible to lead both arms up directly with the hands folded together and so to extend the thorax more strongly. The arms always remain light and carried, while throughout the upper spine an elastic but lightly held tension develops. 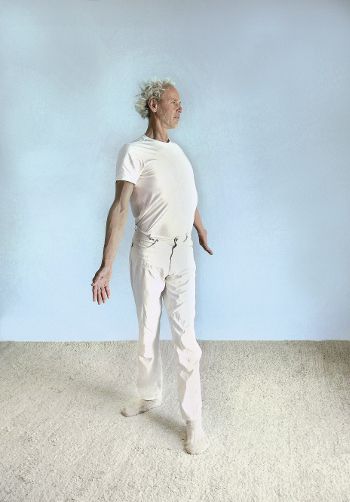 Finally light twists to the side can also be carried out, allowing the same relationship of a subtly ascending tension out of the central part of the spine to the relaxed shoulders. The breathing in the sides is promoted in this way.

In addition practitioners experience the lower chest region and the sides of the body in a very regulative relationship to the shoulder girdle. For example if the shoulder muscles become fixed, the breathing is obstructed in its natural movement. The relationship between chest and shoulders is also important for the experience of differentiating between will-power and formation-of-ideas. A subtle extension of the back out of the middle of the spine results from all movements of this kind, while the upper region of the body in the shoulders and neck remains light. So the movement of the chest develops approximately from the centre of the spine. Starting from the back, the chest extends lightly into the floating ribs. At around the level of the kidneys is the will-centre, while at the level of the collar bones and the larynx the so very light and flower-like formation-of-ideas manifests. Someone who develops favourable ideas for life radiates light and colour in this region of the larynx. 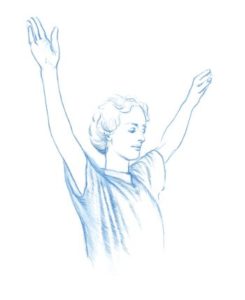 The therapeutic efficacy of this very fundamental breath exercise is due to the promotion of all excretory processes. Excretion usually happens via the kidneys, the skin, the digestive system and the breathing. As it becomes free, the breath in its lightness on the one hand stimulates the protein-generating metabolic processes, allowing less waste to accrue, and yet, via the relaxing autonomic nervous system it encourages the elimination of toxins and inadequately broken down metabolic products. The exercise gives to the awareness the experience of new openness for sensory impressions and the possibility of envisaging ideas in a relaxed way. The will remains, as paradoxical as it may sound, deliberately held back, while the senses actually sense a new space and a joyful touch with the external reality. To use esoteric language, the astral body expands in this gesture, affording in response a natural relaxation. Via the senses, new thoughts and sensations can actually flow in. A new step in life coming from a healthy openness ultimately leads to good processes of elimination. In contrast to this healthy condition of sensory openness and feeling of space, heightened vulnerability describes a fixation of the will to the now fearful senses, and the astral body must consequently tense up more and more. For this reason vulnerability does not demonstrate a real openness in which the senses can circulate lightly and freely with the external world, but shows that feelings and wilful impulses are fixed, mainly unconsciously, in the body. The breath is likewise unconsciously fixed to the will in this condition and the new experiencing, that is so necessary and wants to enter in through the senses and through a free consciousness, remains barred.