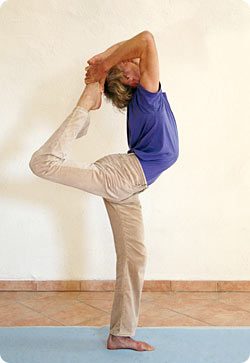 ”The sublime position of the dancer, natarajasana, which is barely comparable to any other pose, is surely one of the most advanced yoga exercises. Although this pose needs years of preparation, before it becomes possible to complete the end-position in the greatest possible uprightness and with completely harmonious unity, attention should nevertheless be paid to it by intermediate practitioners. Repeatedly working with a yoga pose, which seems through its difficulty to lie in far-distant dimensions, gives the practitioner an innermost impression, which works on the soul and which expands from within, outwards to a richer experience. One goal of yoga practice lies in this enrichment of the consciousness.“

From »The Spiritualising of the Body« by Heinz Grill

“In movement, in the raising and lowering of the limbs, in the dynamic interplay of stillness and motion breathes an inner feeling, which streams out in its soul-origin from the light of the cosmos. By studying movement according to its inner soul-content and hidden perceptions, we experience the cosmos in its laws and effects.”

From »The Soul Dimension of Yoga« by Heinz Grill

The practice of yoga with physical exercises, (in Sanskrit known as asanas), can contribute in a very aesthetic and holistic way to stabilising the body and activating the soul-forces. Heinz Grill has in the last decades worked out a body of suggestions and so-called imaginations for the individual yoga exercises, and so he has worked through the classical exercises of hatha-yoga in a completely new way. In this way of practice the body becomes more like a tool for training the thoughts and feelings, and the body exercise becomes more and more an exercise of the soul, which only comes to expression in the body.In this way the yoga exercises on this path are not used so much for energising and charging up the physical body and preparing for meditation, but they are understood as the symbol and materialisation of soul and spiritual laws. Practitioners are urged to occupy themselves more deeply with the meaning, the sense and the so-called expressions of the exercises and to establish a deeper understanding of the different planes of body, soul and spirit. Furthermore, the asana exercises can open up in a unique way an authentic experience of the different regions of the soul life (the so-called chakras) and thus allow the practice to become a lively course of study, which leads ever deeper into the mysteries of life and the cosmos.

The principles of the asana practice are to be found above all in: