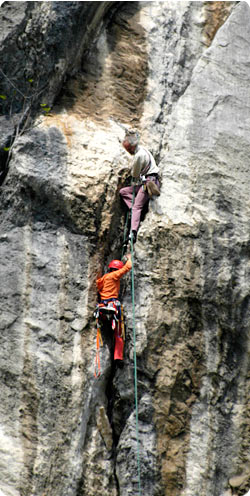 Heinz Grill (above) in a climbing route
which he has constructed 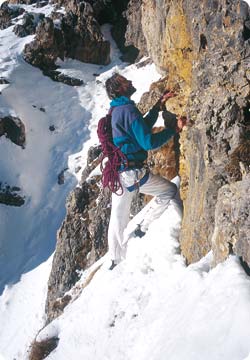 Heinz Grill at the start of a climb

Heinz Grill’s youth and early years were marked by mountain-climbing and the experience of nature connected with this. Over the years many profound statements about the relationship of man to nature have been developed from his experience.In relation to climbing Heinz Grill decribes in various contexts the pain of the soul and the destructive effect on the spirit-elements in nature, caused by the loss of respect for the world of the mountains.

”According to how we connect with nature and the mountains, so will they meet us in turn with joyful warmth and harmonious ecology. It is actually a profound law that everything that we think, perceive and all that we bring into creation will in turn breathe back to us out of creation. The loss of the spirit-elements, which is evident to a threatening extent and which in a deeper sense disturbs the whole ecological balance of the earth, is an expression of the partial attitude of man which tends to extremes.“

From the cover of »The Archai and the Path into the Mountains« by Heinz Grill (Available in German only: ”Der Archai und der Weg in die Berge“)

Whereas the earlier mountain-climbers bore a certain feeling of respect for the greater dimension of the mountain, for modern sport-climbers the mountain becomes more and more a kind of sports-object, according to which they measure themselves and which they would like to “conquer” in a physical elevation of their outer personality.

In earlier times, as Heinz Grill describes further, climbers had worked out and ”read“ their routes more out of a relationship to the mountain and in silent respect for it. Nowadays the route is more imposed on the mountain. The spirit-elements of the mountains withdraw more and more as a reaction to these human assaults, and the mountains lose the magic of the nature-beings.Beyond climbing itself Heinz Grill has developed a body of insights into the soul and spiritual meaning of plants and the animal world. He describes, for example, the nature of the birch tree as childlike and youthful, connected with the blossoming metabolic processes of the individual and the building of proteins, having a venus-like quality. Connected with the soul-exercises developed by Heinz Grill, it is also possible to experience these insights which have been won from an expanded awareness. Thus the potential opens for stimulating our own experience of nature in a new way and also in turn gaining for ourselves a consciousness of the mysteries of creation.