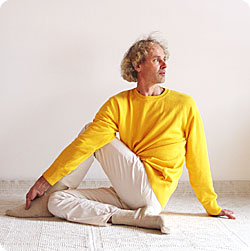 Heinz Grill in matsyendrasana,
the sitting twist, which depicts an expansiveness of the thinking and an overview of the body from the head.

In the booklet “The Aim and Approach of Yoga out of the Purity of the Soul”, Heinz Grill describes the aim of yoga in the following succinct way:

The aim in Yoga is, in general terms, a perfect freedom. Yet this freedom, which is spoken of in a general way, could very easily become misunderstood and signify a kind of emotional vitality with an ecstatic experience of life, or it could be a hidden self-identity which is based exclusively on intellectual values and knowledge. However Yoga does not seek these outer forms and experiences of feeling free, but rather a freedom of the so-called self, described in Yoga as the highest purusa, in manas, the thinking, in buddhi, the feeling, in atman, the will. That freedom which arises on the path and should ultimately prevail has quite a different radiance from that which exists initially. Those practising remain the same in their life arrangements, tasks and duties, they keep their usual circumstances and do not change their lives to follow alternative principles which have an Eastern or ideological emphasis. They now become stronger and more stable in their soul-life, and this offers them greater freedom in their external encounters. Practitioners also become freer in relation to themselves and can recognise trivial worries, fears and dependencies more as relative conditions of existence. The freedom which arises on the path of development is therefore not of an outer nature, it rests on the flexibility and dynamic activity of the thinking, feeling and willing, which become objective soul-instruments and are permeated and enriched by a light-filled spirit. A new and greater awareness is added to the previous consciousness. The soul expands beyond the usual genetic limits to a greater comprehension. So at the beginning there is a person who is born in karma or in the flesh, and at the end, one who is born in the spirit or purusa. In order to succeed, however, the path must be paved from start to finish by very pure terms and be embarked on with free decisions and free steps.