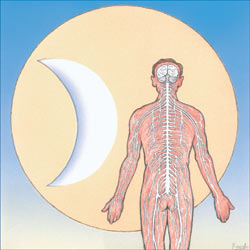 “The moon in the sun”
Image from the book:
“Cosmos and Man” by Heinz Grill

“The situation of illness can lead to deeper thoughts about a previous way of life and open up a more conscious, fresh start through the inner work. The courage for a truly fresh start strengthens the exhausted immune system in a crucial way and brings into flow energies for the future. The decision for a more conscious life with more focussed intentions and greater ideals can occur at any time of day and at any hour through one’s own inner will. This will steps forward without influence, through conscious and courageous attention to the here and now, and enters into the reality of the living existence that is given. Without being influenced externally, without manipulation, without the art of persuasion by doctors and healers and witout compulsive, fearful expectations of life, each person can come to the decision for a fresh start, inspite of the diagnosis they are given.”

From: “Explanation, Prophylaxis and Treatment of Cancer” by Heinz Grill (Available in German only: “Erklärung, Prophylaxe und Behandlung der Krebskrankheit)”

In the field of healthcare and medicine there are two aspects which are opposed to each other: a medicine which trusts in advances in technology and an alternative medicine built on the practices of natural healing. Whereas the first is under the illusion that the machine, “man”, can at best be repaired and ”construction-errors“ in evolution ultimately even improved, the second wants to bring the unbalanced organism back into balance.

The thoughts of Heinz Grill in relation to illness and health are not connected to either of these approaches. Illness in his view is not a malfunction of the body, but fulfils an essential function in the course of the destiny of the individual to greater perfection and love. The occurrence of illness is more a kind of correction for people, which reminds them of the need to overcome mistaken, inner attitudes and so calls them to develop their abilities and virtues.

From this perspective it can never be a technology or a method which brings healing, even if these belong to the so-called soft and natural methods like yoga for example. Techniques and methods can only support the healing process and as such are not to be rejected in any way. But it is always individuals themselves, who raise themselves up to greater activity and capacity for relationship, develop their creative powers and so learn to overcome the illness completely from out of themselves.

For the sick and especially for those who suffer from a so-called “fatal” illness, there is a question of one’s own will and the courage for self-overcoming. Even if the creative power of the sick person is insufficient and death can no longer be avoided, from Heinz Grill’s spiritually developed perspective on humanity, it is important for our further, after-life destiny if we raise ourselves above a passive attitude of expectation about medicine and treatment and grow into greater activity and individual responsibility.

For doctors and healers the question arises from this perspective as to how they should guide patients who usually seek help from them with an attitude of expectation. How should they guide them in a beneficial way into their own activity and responsibility for themselves, and also how can doctors and healers themselves expand their own knowledge in such a way that they can become true healers?

Other interesting literature on this topic: