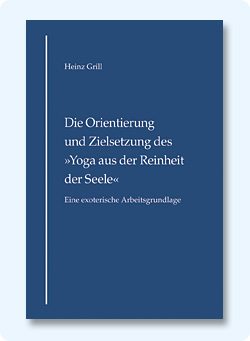 ”The exoteric foundation of the teaching quite deliberately separates the scientific basis, which corresponds completely to the laws of contemporary culture, of pedagogy, of comprehensible desciption and visible forms of teaching, from the texts, insights and studies which come from another reality, and so have a mysterious, initiatory and intangible energy and effect.“

of »Yoga out of the Purity of the Soul«

The term “exoteric” in its usual definition means a foundation for religion, which is intended for all people and for the public in general. It is a term which describes a natural openness. In a certain contrast to this is the term “esoteric”, which is used for a religious discipline valid only for specific people who have already been prepared. It is the path of initiation into a quite different form of reality.In the last decades the term “esoteric” has gained an extremely varied, profane meaning and has been introduced into everyday public life, with a broad range of methods, exercises, movements, rituals, uses and techniques, in a way that contradicts the very essence of initiatory life.

It is not the profane meaning which is intended here with the term “esoteric”, but rather the actual classical form of initiation into the experiences and thoughts of the spiritual worlds. However in the discipline of Yoga a very clear division is made between the components which are exoteric and those which are esoteric in character.For the sake of simplicity it can be said at the start that in general the original texts written for »Yoga out of the Purity of the Soul« have an esoteric and so initiatory quality, while all the forms of teaching arising from it, and the ways of approaching and working with the teaching, are formed on a typically exoteric basis. Instruction in this kind of Yoga therefore has no particular, mysterious or mystical elements, but rather a natural, educational and scientific basis.

The original texts and the contents which have been written down for the Yoga, are meditation texts and cannot be understood by contemporary scientific analysis, for they are for the most part descriptions of a different and higher reality. This higher reality is only understandable through a very gradual approach, with the development of an all-encompassing and spirit-filled logic. The unusual demands made by this content, which in itself is a concealed train of thought, does not nevertheless mean that it might be wrong or irrational. It is only incomprehensible within contemporary scientific paths with their intellectual and analytical methods.For this reason, the reader may well wonder what purpose the texts then have with their un-scientific and non-analytical character. A small example can explain their meaning.

In the descriptions there are soul-experiences and various indications of the existence of a soul-mystery. The very unusual purpose of the teachings is accomplished through the way they are described. As a rule the conventional awareness is completely bound to the senses and to the way they flow from the body outwards to various objects. The movement of the senses in this direction enables the usual, scientific method, bringing an ability to judge, which correlates with the ability to analyse and reach conclusions. But in the texts of »Yoga out of the Purity of the Soul« the goal of the thinking is reversed and is directed as though from something external to something internal, going from an object to the personal consciousness. In the descriptions an atmosphere of spiritual vision which corresponds to a body-free soul is to be found. This is another reality which is close to the levels of purity in the heavenly regions, and so looks on earthly events with that logic which is usually only liberated after death. Those who study the texts of »Yoga out of the Purity of the Soul« work their way into the other-worldly, eternal laws of life. The scientific view of our modern culture proceeds from a sensory awareness and from a reality that can be researched. The spiritual way of seeing however proceeds from the reality of a cosmic and eternal consciousness, into which the soul is only integrated after death. This realm after death belongs to a different sense of reality and a different direction of the thinking from that experienced by the worldly, conventional understanding and awareness.The exoteric teaching principles quite deliberately separate the scientific foundations, which correspond to the laws of contemporary culture, of education, of comprehensibility and visual teaching methods, from the texts, insights and teachings which emerge from another reality and so have a mysterious, initiatory and intangible energetic action.The over-arching term »Yoga out of the Purity of the Soul« does not however preach a new religious movement, a new Yoga with alternative exercises and standards, nor a religious group, which is oriented towards a creed or an ideological world of the future, but rather this description intends to express directly in words the inner discipline of the practice, which arises out of a discerning understanding of the different connections between body and soul. From this discerning point of view the physical body is not the primary starting point in which the development into the higher insights and planes of the consciousness begins. It is rather the consciousness which is trained to a higher level through right sentiments, thoughts and attitudes to practice, and which is ultimately expressed via the body, the speech, the gestures and actions in expansiveness, beauty or wisdom. The Yoga emphasises the artistic and aesthetic quality of being and is oriented with all its different exercises more to the development of the so-called soul-forces, namely to the thinking, feeling and the will, which should be expanded in their capacity, refined and illumined by spirituality. If the soul-forces and not the body are primarily addressed as the means of conveying perfection, then in the Yoga this is a direct form of expression of development and of learning. This primary emphasis of the soul, of observance and respect for a spiritual reality and the development of the soul-forces, is characteristic for »Yoga out of the Purity of the Soul«.This approach to the practice is clearly differentiated from a mystical path or from those forms of Yoga which are usually combined under the somewhat unclear terms of “Hatha-Yoga” and “Kundalini-Yoga”. Quite simply, without being technical, »Yoga out of the Purity of the Soul« wishes rather to strengthen the spiritual components in the global nature of an individual’s being. On the path of development, the spiritual components, and thus the components which are to be newly individualised, should be constantly elevated to a more mature, more stable and at the same time more unified personality, so that the body, with its fears and troubles, recedes in its dominance, and a light of something individualised and also infinite takes guidance.

To print open the booklet in PDF format.

(A PDF is a format which can contain so-called “active” content, as a result some browsers give a warning before opening. This PDF contains pure text for the purposes of layout, and does not carry out any activity on your computer.)