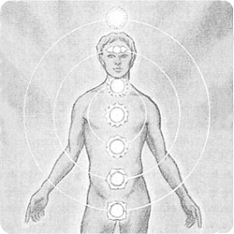 “The path of spiritual development described here with the three circles seems boundless and is an expression for creative imagination, creative inspiration and for the highest intuition. Life on earth, which each and every human being receives from the providence of the higher will, has great meaning. The development of each individual person on earth leads to an increasing freedom for others and for the earth”

From »The seven-year phases of life, the seven energy-centres and the birth out of spirit and water« by Heinz Grill (Available in German only: ”Die sieben Lebensjahrsiebte, die sieben Energiezentren und die Geburt aus Geist und Wasser“)

Through the transforming and uplifting power of meditation, the slowly awakening I of the student develops a sense for the attachments and dependencies which they have created in their personal environment, and which have previously prevented a liberation of their creative power. Students notice how previously they themselves could not actively shape the relationship to their partners, their friends, their work-colleagues, children or parents, and so many demands, unconscious reproaches or symbiotic dependencies determined the state of these relationships.Through the more intense relationship to the spirit, and the resulting inner freedom and independence in their self-awareness, they learn to think and order their personal environment in a new way, according to an ideal. Their actions are now led more by an ideal of doing right for others and speaking rightly, but also of not getting involved in power-games or being dependent on the energy of others.So spiritual students create a free standpoint in their hearts, from which they can now approach others and the world with its many manifestations, as well as the mystery of the spirit. Slowly they learn to create a reconciliation and synthesis of the two worlds, which were in such opposition at the beginning of the training path.

As you can see in the image on the right, gradually in the ever more intense effort for the ideals of the yoga, three circles are formed. Around the central focus of the heart, in paired connections between the upper and lower centres, these circles describe the step-by-step transformation of the thinking into so-called creative imagination (innermost circle), the feeling into inspiration (middle circle) and the transformation of the will into intuition (outer circle).

The basic thought of a synthesis between spirit and matter infuses the whole of Heinz Grill’s work. It is crucial above all for the spiritual and artistic practice of physical yoga exercises. Two works of interest in this connection are:

Literature by other authors: