The health effects of the spine’s own dynamic
Article by Heinz Grill:

The image of the exercise

The geometric figure of a circle has a centre and a periphery. The point in the middle anchors the circle, with its evenness, in its own centre. The rounding movement, harmonious and uniting, reveals a periphery, which represents a kind of infinity both inside and outside. 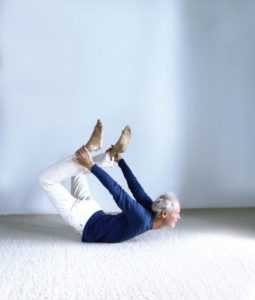 The bow in yoga develops out of the spine’s own dynamic strength to stretch. The spine pushes up against gravity both towards the legs and also towards the chest, acquiring by itself a tension throughout its length.

Practitioners might evade this not so simple, strenuous impetus, which begins out of the back itself and its muscles. In other words, they might only passively move the trapezius, latissimus dorsi, quadratus lomborum, longissimus and longissimus thoracis muscles (1) in the lumbar and thoracic region by pulling the legs up with the arms. This very easily causes congestion in the lower back and the potential regenerative effect which the bow carries remains largely neglected. The bow should grow into the the graceful height seemlessly, out of its own dynamic, and in this way present an image of joyful metabolism and regenerative activity.

The significance of the metabolism

The metabolic forces, which are located in particular in the upper digestive organs, in the region of the stomach, pancreas, gall bladder and liver, likewise need movement and a healthy use of will-power for their activation. The many seated activities and imbalanced intellectual overload increasingly weaken this active digestive region, which needs fire to provide many enzymes to process our food. If there is a healthy will-activity, particularly from the spine itself in the sense of a growing strength to stretch, these metabolic forces in the region of the stomach and pancreas come to life and one is immediately refreshed.

At the beginning the bow is unusual, uncomfortable and difficult. The high tensing of the spine towards the thighs and knees needs access to an independent impulse of supportive tension extending out of the middle, in other words out of the centre formed, in the bow, by the spine. The periphery is formed by the limbs, the arms and also the head. But where is the central point? Is it at the lumbar spine, relatively low down on the spine, or is it higher up, around the 8th, 9th, 10th thoracic vertebrae? 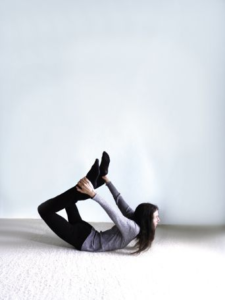 If we look at the bow we can see that through lying on the front, the contraction tends to happen from the lumbar spine, and this means that the focal point, from which the bow unfolds upwards, is not present in the thoracic regions. However, if the focal point is the abdomen, the spine cannot be sufficiently energised and one becomes fixed quite strongly at the periphery though pulling with the arms. The tension that comes through pulling prevents a continuous and free flow in the neck and then the picture results more of a circle which displaces its inner centre through its own fixedness. The tension is too strongly at the periphery.

Through skillfully letting go, combined with a relatively high degree of flexibility in the spine, practitioners can succeed in transferring the focal point more into the middle, and then the thighs and knees can be raised up really dynamically. Practitioners then rest on the chest and no longer on the abdomen. Their balance appears sensitive, while the periphery with the limbs of the neck and head can move astonishingly easily and buoyantly into the developing, upwardly directed bow-form.

Therapeutic effects of the exercise

The therapeutic effects of this exercise, which stretches centrally out of the thoracic spine up towards the legs, to some extent even levitating upwards, is precisely that now the lumbar spine, from the middle, vertebra by vertebra, acquires an unusual and new momentum and through this the cartilage is energised. A specific, regenerative blood supply enters directly into the tissue between the vertebrae and the ligamentous areas there. The spine seems like a bow with flawless wood. Were this bow to be made from wood that was too dry, it would break under tension and if it were to be still in its green, sappy spring wood, it would produce no strength but only softness. Flawless, not too dry and not too moist, continuously dynamic in all sections, elastic, well maintained in its entire unity and thus joyful as it springs up impulsively, the bow gives the spine and the individual vertebrae the ideal supportive metabolic supply.

Alongside the wholesome effect of this strength to stretch continuously from a centre outwards, the back muscles in particular are indirectly activated and strengthened. As mentioned by Günther Braunger in his text “Rhythmic Structures”, the blood supply to the organs, to the liver, kidneys, spleen and heart, is distributed very harmoniously after practising the bow, and congested regions are released, while organs without such a good blood supply are better integrated. The lymph flow is highly perfused with vitality. Lastly, alongside this effect of harmonising and activating the metabolism, the parasympathetic nerves can engage extremely well with their regenerative power.

Assistance in the bow

Because of the difficulty just of the unpleasant position lying on the front, in which practitioners can hardly access the thoracic spine, a very welcome and helpful support can be provided by a third party. First the helper or yoga teacher points out the place on the back where the centre of contraction should lead outwards. This is somewhere between the 8th and 10th thoracic vertebra, relatively far above the lumbar region. Now practitioners try to rise up through the strength of their own spine and push their knees up as high as possible. The head remains pointing forwards. At the highest point of this independent dynamic of the back, the assisting teacher now begins to tip the body towards the head, by taking hold of the ankles. Without forcing the movement upwards, but merely drawing it towards the new focal point, far towards the head, the helper alters the whole circular form of the bow. Practitioners now lie on their chest and even slightly on the breast bone.

While holding their ankles to stabilise the balance, the teacher now encourages the student to actively stretch upwards from the point on the thoracic spine, through the legs towards the knees. This dynamic now acquires an astonishing centring in the spine itself and practitioners may be able to move, at first for moments but soon for several seconds, into this graceful levitation of the legs. The spine curves inversely upwards though its whole length and without forming an adverse lordsosis (2).

The most essential therapeutic effect of the bow position performed through the spine’s own dynamic happens as follows: Inside the spine, the spinal canal, there is the fluid or so-called cerebrospinal fluid. This fluid must remain in constant circulation. It constitutes a connection between the brain and the whole spine. By learning to access the contraction from the thoracic spine through to the lumbar spine and into the periphery of the limbs, practitioners centre extremely intensively on one inner point. The dynamic movement upwards in the bow does not emerge from a large area, but actually from one point. One might think that the muscles are brought to intense awareness and that is why the movement is so precise and alive at that moment. However it is not the muscles that start off the movement, but rather the inner component of the spine, the so-called nerve-ether, the force which exists in the fluid. And now, as if in a moment of warmth and shimmering radiance, this nerve ether in turn gives the impulse for the movement into the periphery. In fact from that moment on, the limbs, like the legs, become light, as if relieved from gravity. The movement becomes centred in its mid-point, streams out to the periphery and finally forms the point and the circle. The movements, which ultimately happen out of the middle of the spine, can harmonise and relieve the periphery.

The cereprospinal fluid with its density relieves the brain to a great extent from gravity. If the forces of this fluid are addressed through the movements in the bow and the movement apparatus can for moments be released from its heavy and rigid fixedness, an astonishing life-elixir can come to flow from inside outwards. The forces of regeneration are therefore to be interpreted as coming from the intensified flow in the spinal canal.

See also the photo series of the bow and complete bow.

1. The trapezius muscle originates on both sides of the upper spine and extends from the occipital bone down to the lower thoracic vertebrae and sideways to the shoulderblades.
The latissmus dorsi is the large, flat muscle on the back that stretches along the spine and to the sides.
The quadratus lomborum is one of the deep abdominal muscles.
The longissimus is the longest muscle of the back and stretches along the whole length of the back from the sacrum to the head.
The longissimus thoracis is the thoracic section of the longissimus muscle.

2. Lordosis means a forward curvature of the spine, commonly called a hollow back. Lordosis is the opposite of Kyphosis, a rounded back.