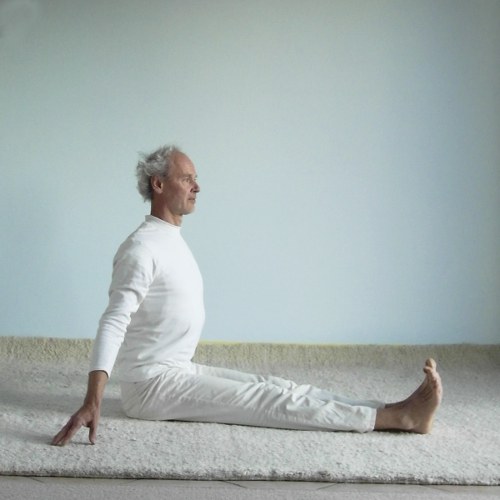 The body as a reflection of the cosmos

The translation of paschimottanasana as “head-to-knee position” is unfortunately very imprecise as the original Sanskrit name literally means “intensive stretch of the back”. Pascima literally means “West” and uttana describes an intense stretch. In earlier times in yoga the human body was experienced within a context that considered the entire cosmos, and so the back was called the Western part of the whole bodily entity. By stretching out the back intensively, the head is carried out beyond the knees and the intention is therefore of a different, far more extended formation than would come about if the head were only pressed down to the knees.

To take advantage of the excellent healing potential of this pose, practitioners should never work their way too soon into the position with the head pushed down, rather, in order to take care of their spine and the discs, they must really lengthen in a skilful way. If the head is taken downwards too soon without this dynamic of extension, and if the middle back is rounded more than usual under pressure, slipped discs in the lumbar region are predestined. Extension, which should happen preferably out of the middle of the back, is therefore significant for this position and its healing effect.

To practise pascimottanasana it seems advantageous to lift the chest upwards, particularly the ribs, right from the start. This lifting of the chest, which happens preferably out of the middle of the spine, should be done several times while going into the stretch forwards. In this way the chest is directed beyond the knees, and the back experiences an extension through its entire length. Only once this has happened sufficiently do practitioners stretch with their hands beyond their feet and finally sink the head towards the shins. If this extension is only attained partially then the head should remain raised and the chest in an active dynamic, still striving forwards. The arms merely lengthen forwards and upwards.

To optimise the healing effect, the spine should be felt in the region of the 9th and 10th thoracic vertebrae. Here, at this centre, the initial dynamic should grow, while neck and shoulders remain reasonably released. Practitioners literally pull the spine forwards lengthways out of this centre. They centre themselves by leaving the upper body relaxed and learning to involve the middle of the spine intensively.

The healing effect on the metabolism

The extension in pascimottanasana takes place out of this central point of the spine, streams out centrifugally and so relieves the periphery. The healing effects which result from this skilful and focused exertion out of the centre of the spine are of astonishing significance. Any exertion which happens in a very focused way, while the shoulder and neck region are relaxed, mobilises the metabolic system. In the region of the stomach, pancreas and gall bladder, very active processes take place in which nutrients are transformed and enzymes are produced. This upper region of the digestive tract can be distinguished from the lower region, centred in the small intestine, in that predominantly catabolic processes take place, whereas in the small intestine anabolic processes dominate.1)Anabolic processes are the ones that build molecules up and catabolic processes are the ones that break substances down. If food is not completely broken down through the action of hydrochloric acid and pepsinogen in the stomach, and through the pancreatic juices that are released into the duodenum, residues with toxic effects remain. Waste products and liver overload are the result if these so necessary catabolic processes are inadequate.

To deal with the flow of food, a person needs to apply a certain power. When tired or more severely exhausted, or in anxious situations, one should not be inclined to eat by way of compensation as one will discover that this food is poorly digested. It is however less the anabolic processes that are disturbed through exhaustion and anxiety, but actually more the break-down processes. When it is generally stated that the head-knee position strengthens the digestion, then this effect is the result of stimulation of the catabolic processes through the focused activation of an intensive dynamic.

If one looks at the picture of this centred and successful contraction in pascimottanasana, one gets the impression that the practitioner works with highly active willpower and yet at the same time the physicality seems to recede. He or she feels focused and yet at the same time open to the outside. The most important healing effect of this position is to stimulate the above mentioned healthy catabolic process, which then also results in harmony in the lower region of the digestive system. Alongside this effect, the autonomic nervous system receives a natural stimulation both in the sympathetic trunk in the back, belonging to the sympathetic nerves, and also in the whole complex encompassed by the vagus nerve.2)The vagus nerve is the largest nerve of the parasympathetic nervous system. It is involved in regulating the activity of nearly all the inner organs. This practice with clear application and consciousness, in which the movement is structured with activity at the centre and relaxation of the neck and shoulder region, also encourages mental equilibrium with natural calm on the one hand and joyfully sensitive alertness on the other. The skilful exertion awakens a trust in one’s personal strengths.

Another positive quality, which is the result of the centring of the spine in manipura cakra3)Manipura cakra is the third of the seven energy centres known in the teaching of yoga. It is situated level with the stomach. through the lengthening stretch forwards, is the effect on brain metabolism, particularly on the secretion of serotonin4)Serotonin is a tissue hormone and neurotransmitter. It is found, among other places, in the central nervous system, intestinal nervous system, heart and circulatory system and in the blood. The name of this biogenic amine is derived from its effect on blood pressure: Serotonin is a component of blood serum and regulates the tone of the blood vessels. It also affects the stomach and intestinal activity and the transmission of nerve signals in the central nervous system. and also dopamine,5)Dopamine is an important neurotransmitter of the central nervous system which has a predominantly stimulating effect. It is produced in (post-ganglionic sympathetic) nerve endings and in the adrenal medulla as a precursor of noradrenalin. It is commonly known as a “feel-good” hormone. The actual significance of dopamine however is suspected to be mainly to do with increasing drive and motivation. which are mood enhancers and ultimately strengthen the entire nervous system.

The warmth-stimulating activation of the upper metabolic organs promotes the entire distribution and supply of blood to the spine, resulting in a more rapid regenerative intervention following exhaustion, for example after prolonged periods of standing or sitting. Through manipura cakra the spine very quickly regains its vitality and strength. Fundamentally, the stretching of the spine lengthways preserves the health of all the tissues surrounding, supporting and stabilising the spinal discs, and so it prevents degenerative processes. Instead of being pressed backwards and sideways through forcefully pushing the spine downwards, the discs acquire additional space through the spine’s lengthening, and so they can develop their elasticising function.