In the ancient times of India’s yoga culture, every bow expressed a kind of self-released act of devotion, an act of making oneself free from the body, with a simultaneous glimpse of the soul into the infinite cosmos. This body-free feeling is certainly closer for the oriental, who was able, in silent notions, to preserve a cosmic sentiment of soul. To the occidental, who fosters more of an anthropocentric mentality that shows less openness, this feeling of devotion is rather alien. The cosmocentric and anthropocentric attitudes of soul are indicative of the fundamental sentiments of East and West.

In the classical exercise Yoga Mudra, there manifests a release of the head, the neck and the upper body. While the seat in lotus establishes a stable base, the upper body leans forward to the earth. Tensionless, without any use of force, the body relinquishes itself to the fate of the earth. Equanimity and serenity are expressed through the relaxed bowed-down state. 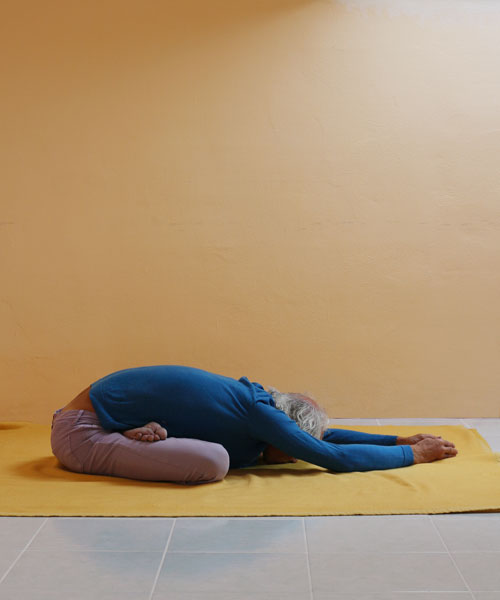 The stable lotus seat and the relaxed upper body.

The more this letting go of the entire upper half of the body succeeds, the more freely and easily the breath can stream into the lung space. The bending down is like a complete state of bodily release and prepares the lungs for the in-streaming breath. Nevertheless, while the body glides relaxed to the floor, the mind dwells in utmost attentiveness, observation and perception towards the individual stages of the exercise. 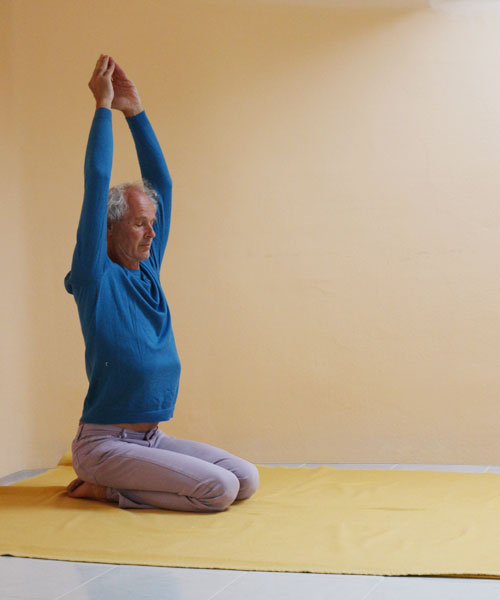 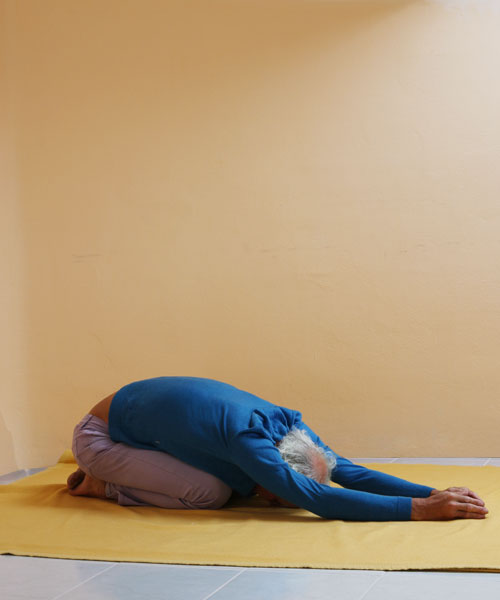 Yoga mudra in the kneeling position is an easier variation.

The focused bowing of the body promotes a growing consciousness of sensitivity and more profound perception. Every form of bodily release enlivens the processes of sensing and of guiding the thoughts. 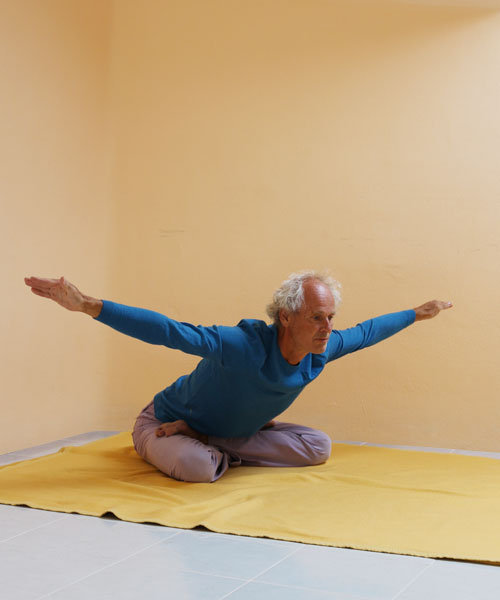 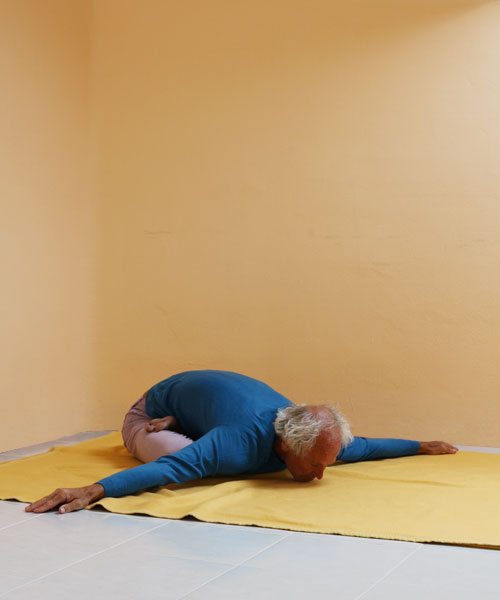 The wide extension of the arms supports the movement down to the floor.

It is the lungs that, during the conscious leaning forward, to an increasing extent are freed from pressures, so that the breath can take up a free movement. The lungs become like a riverbed for a movement of air, opening themselves through the calm in flawlessness and sovereignty, right into the most minute cells. The breath acquires depth without becoming heavy. Yoga Mudra could justifiably represent one of the most outstanding exercises to regenerate the pleura, the respiratory tract, the intercostal muscles, the diaphragm, the bronchi and bronchioles, and it relaxes the shoulders and the neck. 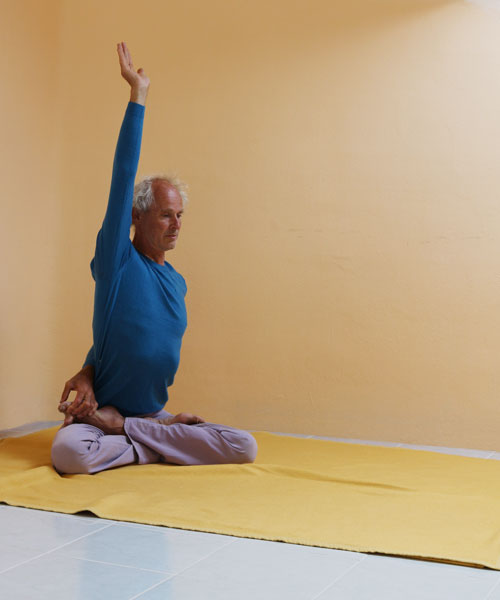 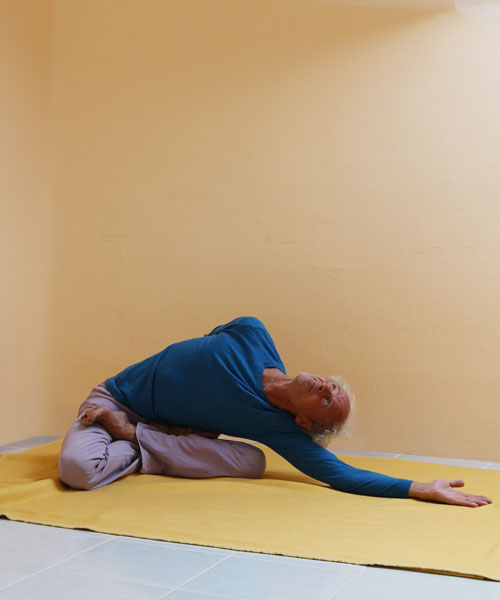 Extending the sides of the body: parsva yogamudra.

Practitioners are bent forward with their upper body and lower themselves to the earth. A subtle process, which can be identified as roughly comparable with a feeling of bodily dying, constantly accompanies the individual stages of tilting oneself forward. The skin has a correspondence with the lungs. It remains relaxed over the whole body and face. When the skin is experienced by yoga practitioners as relaxed, they notice an easier and freer in-flowing of breath. For this reason practitioners should occasionally pay attention to the relaxed skin of their body.

The following variations are very demanding as practitioners need a fundamental degree of flexibility in order to be able to master the bound form of the lotus (as follows) to some extent free from tension. 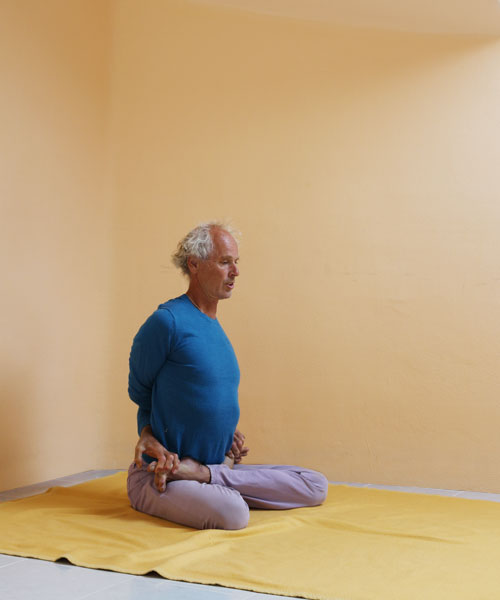 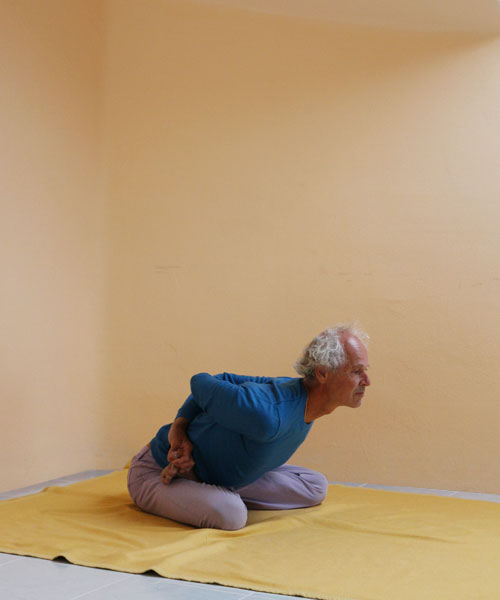 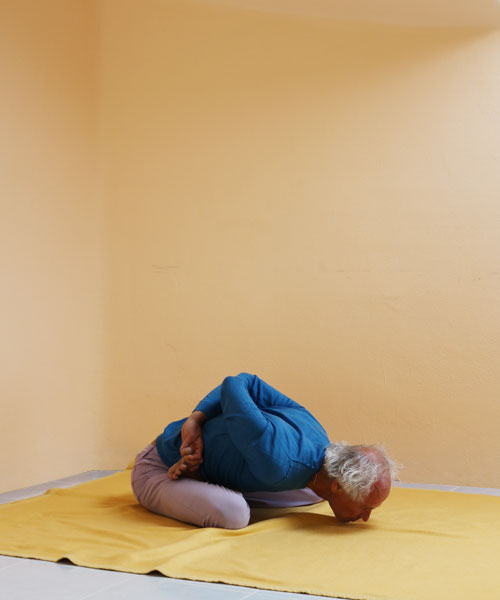 Easier to perform is the arm movement backwards in a suitably chosen sitting position. While the arms rise steeply backwards and upwards, the shoulders and neck remain relaxed. The breath flows into the depth and holds present an exceptionally silent action of forces. 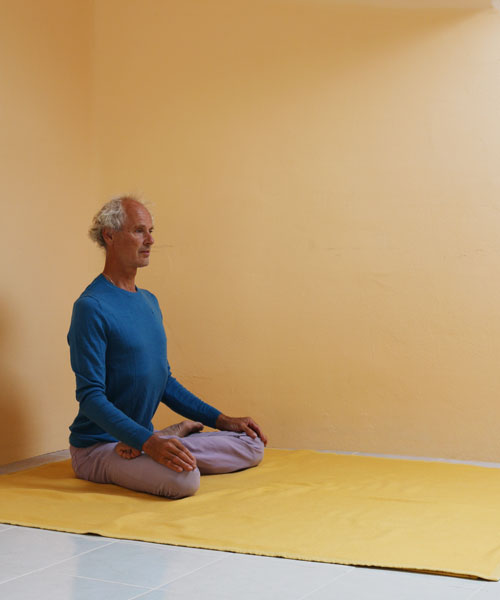 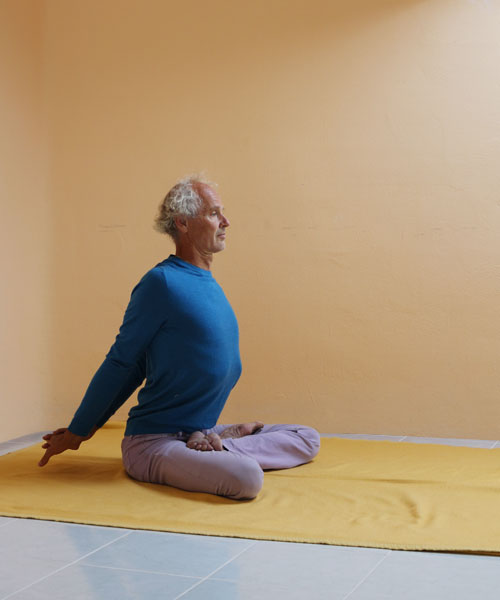 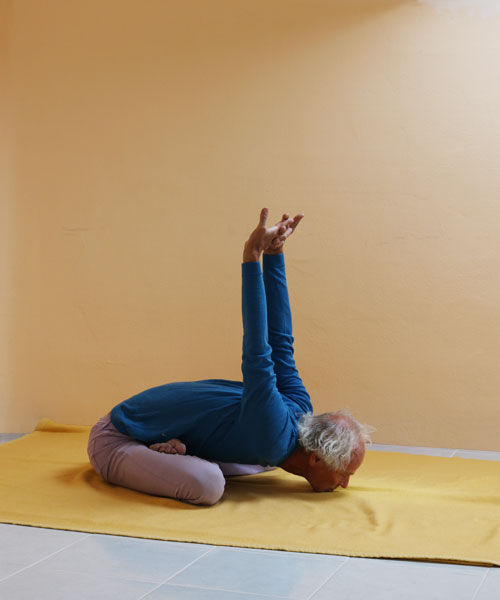 Arm variation behind the back

This movement that follows is usually only possible by conceding to a certain degree of tension at the skin. Nevertheless attention should be paid to the streaming in of breath, as if into a free riverbed, which opens itself to a movement coming from outside. 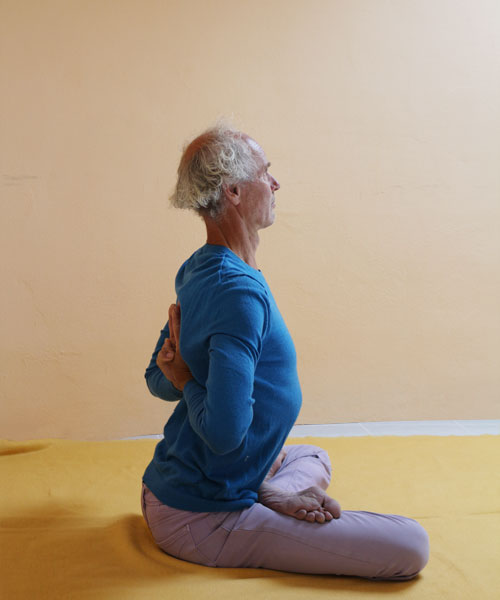 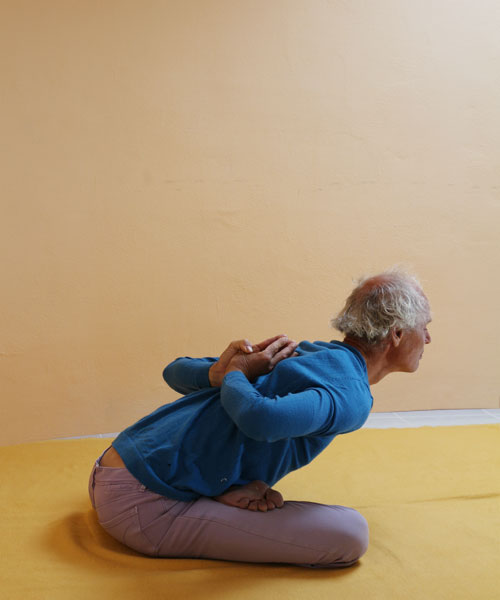 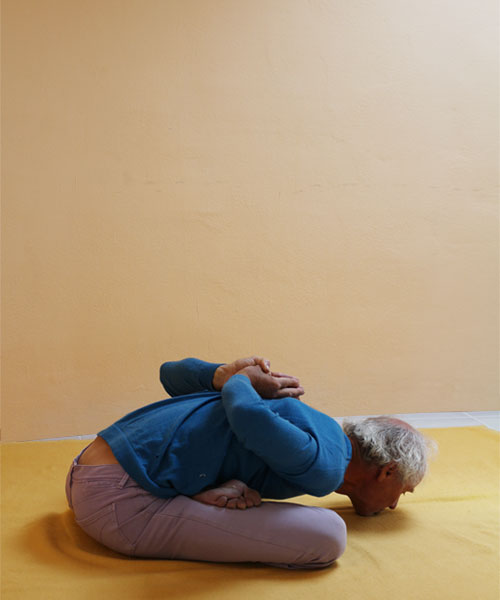 Yoga Mudra with hands folded behind the back.